A recent review of complementary and alternative therapies in the treatment of depression are quite promising.  A study review of the medical literature, conducted by the American Psychiatric Association’s Task Force on Complementary and Alternative Medicine reported its findings  in the June, 2010  Journal of Clinical Psychiatry.

The following is a brief overview of the task force’s findings:

In one study, for example, exercise’s effectiveness as a single therapy for mild to moderate major depressive disorder was tested in men and women aged 20 to 45. Some participants exercised from 1.5 to 3 hours a week, others 80 minutes a week, and still others served as controls. After 12 weeks, the high-exercise group showed a 47 percent reduction in symptoms, while the low-exercise and control groups showed a 30 percent reduction in symptoms. The differences were statistically significant.

In one randomized, controlled trial, for instance, 102 subjects were treated with the drug Zoloft.  The participants  also received either supplemental treatment with 30 minutes of either bright morning (10,000 lux) or dim red (50 lux) light for five weeks. All clinician and self-report measures significantly favored active light augmentation.

“The sheer scope of CAM use in the U.S. is fascinating and somewhat daunting,” Freeman said. “Over 40 percent of adults use at least one CAM treatment annually, demonstrating how accessible and attractive these treatments are to our patients. However, we found that very few CAM treatments [for major depression] have received rigorous study. Our task force hopes that our report will serve as a foundation for future research in this area…. Any treatment for a serious psychiatric disorder, whether considered CAM or conventional, needs to be rigorously studied for effectiveness and safety.” 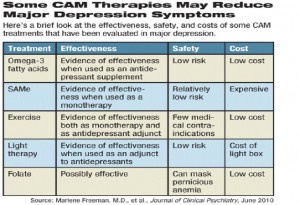