For many years physicians and scientists believed that cognitive decline—memory loss, etc, was an unavoidable portion of living longer, into the sixties, seventies, and eighties.  Fortunately, a growing number of research studies are finding that lifestyle factors including exercise and a healthy diet can delay and probably prevent the process. 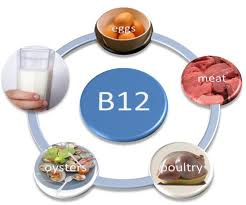 Researchers at Rush University Medical School in Chicago, IL determined there is a link between poor nutrition and cognitive problems in older adults. The report was published the journal Neurology.  It  found that people who are  over 65 with a vitamin B12 deficiency are more likely to have lower brain volumes and cognitive impairment than those with adequate B12.

The study, conducted at Rush University Medical Center in Chicago, measured  levels of chemicals that indicate a B12 deficiency such as homocysteine, as well as levels of B12 in 121 senior citizens.  The researchers looked at markers because measuring levels of B12 alone is thought to be an inaccurate way to gauge deficiency. High homocysteine is also linked to heart disease and other chronic illnesses.

The adults took several cognitive tests and about four years later, they had an MRI to measure their total brain volume.

According to the report’s lead author, associate professor of Clinical Nutrition at Rush, Christine Tangney, Ph.D, “We showed that four out of five markers of B12 deficiency were strongly associated with poor cognitive performance overall, and more specifically, poor episodic memory and perceptual speed.” The researchers also found that brain volume was significantly lower in those with high levels of markers for B12 deficiency.

“We may be missing a potential reason why someone might suffer cognitive decline over time because we’re not making sure they have adequate B12,” Tangney said.

This study supports other research showing an association between the B vitamin and cognition.

A British study determined that taking a supplement composed of vitamin B6, B12 and folate caused a slowing of the rate of brain shrinkage (atrophy)  in adults with mild cognitive impairment.

Tangney theorizes that B12 may impact cognition in two ways.

“One may be by reducing brain volume, and another is that the buildup of markers, like homocysteine, may actually be damaging the brain,” Tangney said.

Currently, B12 is not measured in a standard blood workup, and research suggests that testing blood levels of B12 may not be an accurate way of detecting a deficiency if your scores fall in a gray zone.

In the meantime, here’s how you can take in more vitamin B12:

• As you age, your body becomes less efficient at absorbing B12 from food, so the Institute of Medicine  recommends that adults over 50 take a B12 supplement or eat consumer-fortified foods.

• “We recommend taking two to six micrograms of vitamin B12 a day,” Tangney said.