Take a Vacation – It Can Prolong Your Life!

Are you living a healthy lifestyle?  Even if you are, taking enough time off from your job, to can protect your health!? According to a 40-year study, taking vacations could prolong life.  The results were presented at the ESC (European Society of Cardiology) Congress.

“Don’t think having an otherwise healthy lifestyle will compensate for working too hard and not taking holidays,” said Professor Timo Strandberg, of the University of Helsinki, Finland. “Vacations can be a good way to relieve stress.”

The study included 1,222 middle-aged male executives born in 1919 to 1934 and recruited into the Helsinki Businessmen Study in 1974 and 1975. Participants had at least one risk factor for cardiovascular disease (smoking, high blood pressure, high cholesterol, elevated triglycerides, glucose intolerance, overweight).

The analysis presented today extended the mortality follow-up to 40 years using national death registers and examined previously unreported baseline data on amounts of work, sleep, and vacation. The researchers found that the death rate was consistently higher in the intervention group compared to the control group until 2004. Death rates were the same in both groups between 2004 and 2014.

Professor Strandberg said: “The harm caused by the intensive lifestyle regime was concentrated in a subgroup of men with shorter yearly vacation time. In our study, men with shorter vacations worked more and slept less than those who took longer vacations. This stressful lifestyle may have overruled any benefit of the intervention. We think the intervention itself may also have had an adverse psychological effect on these men by adding stress to their lives.”

Professor Strandberg noted that stress management was not part of preventive medicine in the 1970s but is now recommended for individuals with, or at risk of, cardiovascular disease. (6) In addition, more effective drugs are now available to lower lipids (statins) and blood pressure (angiotensin-converting enzyme inhibitors, angiotensin receptor blockers, calcium channel blockers).

He concluded: “Our results do not indicate that health education is harmful. Rather, they suggest that stress reduction is an essential part of programs aimed at reducing the risk of cardiovascular disease. Lifestyle advice should be wisely combined with modern drug treatment to prevent cardiovascular events in high-risk individuals.”

Figures: Shorter vacations were associated with higher mortality in the intervention group but not in the control group during long-term follow-up 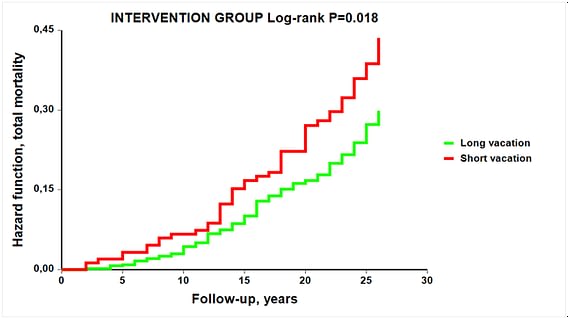 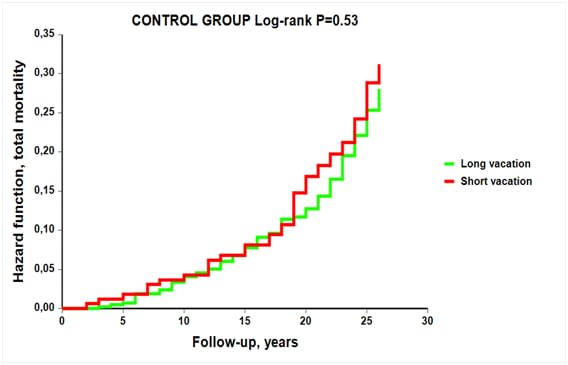