While most Americans know that heart disease and cancer are the #1 and #2 causes of death, most don’t know what the #3 cause is.  If you guessed diabetes or stroke, you’re wrong.

A new study, reported in the latest edition to the British Medical Journal, written by physicians at Johns Hopkins, suggests  most medical errors go unobserved, at least in the official record, and  they are the third leading cause of death in the United States.  Meaning only  heart disease and cancer cause more deaths!

Through their analysis of four other studies examining death rate information, the doctors estimate there are at least a stunning 251,454 deaths –over 700 a day-are due to preventable errors that happen in medical facilities. This number represents 9.5 percent of all deaths in the United States each year.  Even more concerning, the authors believe the number is actually much higher, as home and nursing home deaths are not counted in that total. 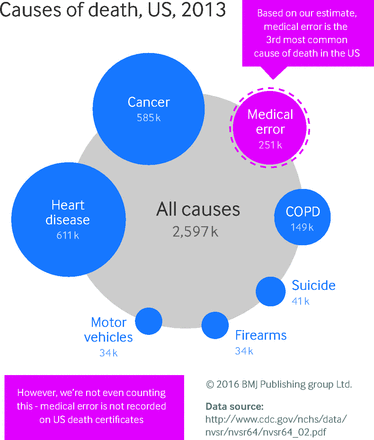 This is a much greater number than a highly cited 1999 study from the Institute of Medicine that put the number in the 44,000 to 98,000 range. Other studies have put estimates closer to 195,000 deaths a year. The U.S. Department of Health and Human Services Office of the inspector general in 2008 reported 180,000 deaths by medical error among Medicare patients alone.

Dr. Martin Makary and Dr. Michael Daniel, who did the study, hope their analysis will lead to real reform in a health care system they argue is letting patients down.

“We have to make an improvement in patient safety a real priority,” said Makary, a professor of surgery and health policy and management at Johns Hopkins.

“Medical errors” in hospitals and other health-care facilities are incredibly common and may now be the third-leading cause of death in the United States—claiming 251,000 lives every year, more than respiratory disease, accidents, stroke and Alzheimer’s.

Death From Medical Treatment Itself

Several studies have highlighted the various dangers of modern medicine. These include the approval of unsafe drugs, the hazards of diagnostic technologies, the high incidence of unnecessary procedures, and the inhumane and frequently stressful way patients are treated. These dangers were compiled and reported in an article called “Death by Medicine.” In addition to medical errors, certain extreme treatments, such as chemotherapy or a stay in a hospital’s intensive care unit, can actually cause post-traumatic stress disorder in those who undergo them.

These frightening  are consistent with other reports.  A 1999 report from the Institute of Medicine found that an “epidemic” of medical errors was plaguing the system, and that medical errors were responsible for an estimated 98,000 deaths a year. That report cited errors including delays in diagnosis, errors in operations and other procedures, dose errors, communication failures, and equipment failures. But this report, which found a far larger number of deaths, reviewed four other large studies and represents a more comprehensive analysis, reports the Post.

Tragically, it appears that we haven’t had much reform in the 17 years between.

Medical error has been defined as an unintended act (either of omission or commission) or one that does not achieve its intended outcome,3 the failure of a planned action to be completed as intended (an error of execution), the use of a wrong plan to achieve an aim (an error of planning),4 or a deviation from the process of care that may or may not cause harm to the patient.5 Patient harm from medical error can occur at the individual or system level. The taxonomy of errors is expanding to better categorize preventable factors and events.6 We focus on preventable lethal events to highlight the scale of potential for improvement.

The role of error can be complex. While many errors are non-consequential, an error can end the life of someone with a long life expectancy or accelerate an imminent death. The case in the box shows how error can contribute to death. Moving away from a requirement that only reasons for death with an ICD code can be used on death certificates could better inform healthcare research and awareness priorities.

There is an increasing awareness that our medical system—contrary to its mandate—is actually the leading cause of death and injury in the United States. Each year, 7.5 million unnecessary medical and surgical procedures are performed. The number of people exposed to unnecessary hospitalization every year is 8.9 million. The total number of iatrogenic deaths (those inadvertently caused by a physician, by surgery or other treatment, or by a diagnostic procedure) is calculated at close to 784,000 a year. The number of people having adverse drug reactions to prescribed medicine while in the hospital is 2.2 million a year. And this doesn’t even consider the adverse reactions that take place outside hospitals, which aren’t officially recorded.

Errors Are Due to Multiple Causes

Martin Makary, a professor of surgery at the Johns Hopkins University School of Medicine who led the research, said in an interview that the category includes everything from bad doctors to more systemic issues such as communication breakdowns when patients are handed off from one department to another.

“It boils down to people dying from the care that they receive rather than the disease for which they are seeking care,” Makary said.

One reason there’s such a wide range of numbers is because accurate data on these kinds of deaths is surprisingly sparse. That’s in part because death certificates don’t ask for enough data, Makary said. Currently the cause of death listed on the certificate has to line up with an insurance billing code. Those codes do not adequately capture human error or system factors.

The study gives an example of exactly how limited the death certificates are when it comes to recording medical errors. One example involved a patient who had a successful organ transplant and seemed healthy, but had to go back to the hospital for a non-specific complaint. During tests to determine what was wrong, a doctor accidentally cut her liver and hadn’t realized it. The hospital sent her home, but she returned with internal bleeding and went into cardiac arrest and later died. It was the cut that led to her death, but her death certificate only listed a cardiovascular issue as the cause.

Medical error is not included on death certificates or in rankings of cause of death. Martin Makary and Michael Daniel assess its contribution to mortality and call for better reporting

The annual list of the most common causes of death in the United States, compiled by the Centers for Disease Control and Prevention (CDC), informs public awareness and national research priorities each year. The list is created using death certificates filled out by physicians, funeral directors, medical examiners, and coroners.

However, a major limitation of the death certificate is that it relies on assigning an International Classification of Disease (ICD) code to the cause of death.1 As a result, causes of death not associated with an ICD code, such as human and system factors, are not captured. The science of safety has matured to describe how communication breakdowns, diagnostic errors, poor judgment, and inadequate skill can directly result in patient harm and death. We analyzed the scientific literature on medical error to identify its contribution to US deaths in relation to causes listed by the CDC.2

Dr. Makary believes there should be a space on the certificate that asks if the death is related to a medical error.  I wholeheartedly agree! If the answer is yes, Dr. Makary suggests the doctor should have some legal protection so the certificate is not something that could be used in a lawsuit.

“I don’t believe we have diabolic leaders in health care,” Dr. Makary said. He believes instead that there could be better systems put in place at hospitals to make them safer.

There are barcodes that could be placed on each piece of surgical equipment so a team could account for every tool at the end of a surgery, for example. Dr. Makary believes many hospitals don’t invest in technology that could prevent errors because the hospitals don’t always realize how big the problem is and don’t make it a priority.

Errors Are A Global Problem

The problem is not unique to the United States. Earlier studies have shown undercounted medical errors are a problem in hospitals throughout the world.

“No matter the number, one incident is one too many,” said Rick Pollack, president and CEO of the American Hospital Association. Pollack suggested there are new studies that have shown that hospitals have made progress. Citing a decline in hospital-acquired infections, according to a recent analysis by the Department of Health and Human Services, more attention is being paid. “Hospitals are constantly working to improve patient safety. But there is more work to do and hospitals are committed to quickly adopting what works into every step of care provided,” he said.

Doctors are human and they are going to make mistakes, but the system shouldn’t continue to perpetuate them, Makary said.

“I think doctors and nurses and other medical professionals are the heroes of the patient safety movement and come up with creative innovations to fix the problems,” he said. “But they need the support from the system to solve these problems and to help us help improve the quality of care.”